It is complete and the inscriptions are closed except for the camping.

The tour of the CTE will leave from the mouth of the Seine in Le Havre and drive up the river until its source via Paris. It will follow its wander-abouts on the plateau of Langres and continue its way until Basel. This pleasant cycle route will contribute to the diffusion of our passionnante longing for a layout for cyclists all along the Seine, from its source to the sea.


From Paris to the Havre, a large programme named La Seine à vélo, from Paris to the sea, is underway, with an opening anounced for 2020. We will follow this programme by driving up the river in Normandy, via the famous sites of Rouen, Les Andelys and Giverny, with only sixty meters denivelation on these 300 kilometers to Paris. Where they exist, we will be following green paths and cycling routes, otherwise slaloming on both sides of the Seine via small routes and buccolic pathways, away from traffic.

After having a first day of rest in the capital city, our journey will continue on the border of the river where possible, but never far from it. We will attest of what is being done downstream of Paris, a nice veloroute under construction, and that it should be continued upstream, on the route Eurovelo 3 and beyond.

Via Fontainebleau, the natural zones of the Bassée, the ancient cities of Provins and Troyes, we will arrive in the new national parcs of the forêts de Champagne et de Bourgogne, decades that no new national parc had been created ! Then we will arrive, at  440 m of altitude, at the sources of the Seine, in plural form as there are seven of them.

The second day of rest of the tour will be held in Dijon. Even if this city inspires more its discovery and to walk around than to rest. Then, sometimes along EuroVelo 6, we will reach Basel in Switzerland. The last day will establish the link with the tour of Trondheim-Oslo-Hambourg in 2020, with a leg in the swiss mountains, so as to get used to some inclinations that await us …

Clic on the schematic waypoints in order to obtain informations on the route and the train stations that give acces to it, the distances, lodgings, planned events … 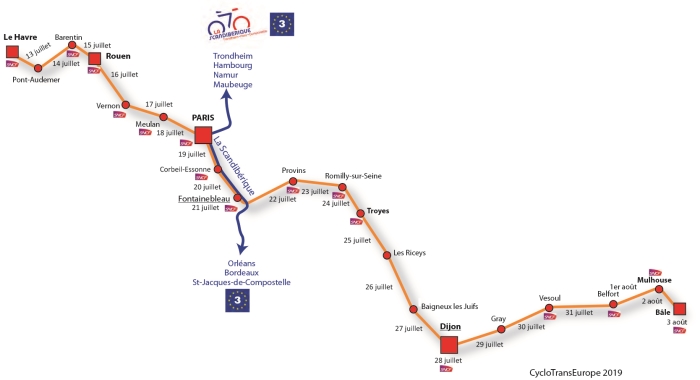 All the informations on the instruction manual of the tour are in the leaflet and the registration form that can be uploaded.

Reservation and payment of campings are on behalf and cost of the campers.